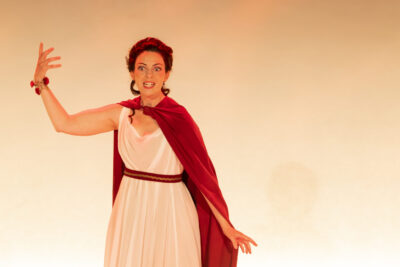 Texts in English, German and Dutch

The excitement of an historical evening in the theatre, set in the oldest theatre of the country. Our Saturday gala event in the Leidse Schouwburg will have no intermission, the lights will stay on in the auditorium, and the audience will come and go as they please. Three short one-act play – a drama, a tragedy and a comedy – will be performed with live music, singing and dancing. With 100-year-old theatrical decors from the Vanderberghe collection on stage, historically inspired costumes, and actors using historical gesture and declamation techniques, this will be a night to remember! The music will be performed by the young early music ensemble Postscript.

Pygmalion is a melodrama about an artist so love with his own creation that his obsession drives him close to madness His beautiful statue of Galatea is cold marble, …or does he see her breathing, can she come to life? With text by Jean-Jacques Rousseau, the version that actor João Luís Paixão and dancer Irène Feste will perform is in German, set to music by the Czech composer Jiri Benda.

Proserpina is a dark and powerfully tragic one-woman show, with a text by Johann Wolfgang von Goethe and music by Carl Eberwein. It paints the desperate situation of the young and innocent Proserpina, who was abducted and forced into marriage with Pluto, the God of Hades. Unlike the Greek myth, where Proserpina is allowed to return to the light for half the year as Goddess of Spring, Goethe’s heroine finds no escape from the horrors of the hell to which she is condemned.

Laila Cathleen Neuman brings the tragic character of Proserpina to life, using the results of her doctoral research into the archive of Dutch actor Johannes Jelgerhuis (1770-1836) as her guide.

The farcical comedy De Bruiloft van Kloris en Roosje (Kloris and Roosje’s Wedding) used to be enormously popular in the Netherlands. It was performed non-stop from the early 18th century into the 1970s. Although it is usually associated with Amsterdam, it was written by Jacob van Rijndorp, the founder of the Leidse Schouwburg, so that in reviving the piece we are also bringing it back home. The innovative performers of Theater Kwast will tear down the fourth wall and draw the audience into the show, reviving lost traditions and leading the evening to a joyous conclusion.

Kat Carson The Spirit of Theatre